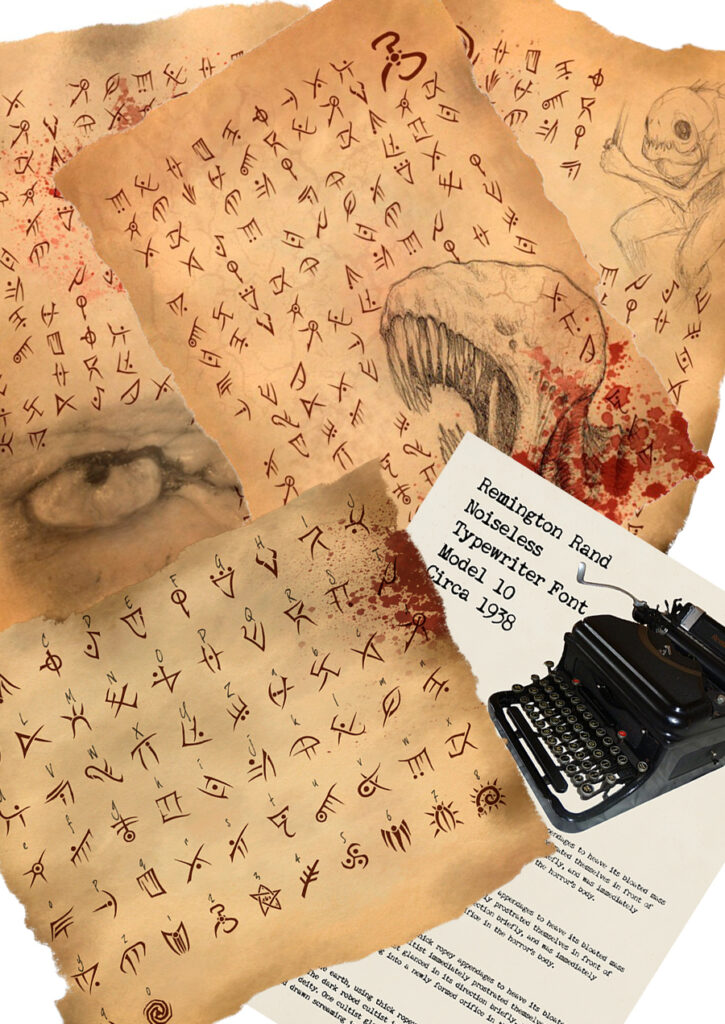 Included in Bundle are The Cthulhu Font, The Remington Typewriter Font and 3 pages from the blasphemous Necronomicon. 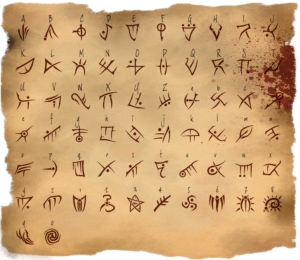 Discovered in 1923 by Stapleton McTavish the famous explorer and collector of ancient occult artifacts, while searching for one of the lost cities of Nubia. Found in a temple buried under the sand 250 miles North of Khartoum, Sudan. It has, so far defied translation.

The strange text appears on a number of recently discovered papyrus, thought to be the missing pages from the dreaded Necronomicon.

Necronomicon Page 76 Eye of the Zombie

“Remove the eyes of the zombie and immerse them in the prepared solution. The caster’s eyes are then to be removed during the ritual, and stored in the box described for safety. Next, insert the zombie’s eyes into the empty sockets of the Caster. Repeat the incantation and then thereafter they may perceive events from the perspective of the zombie.”

Discovered in a crypt carved into the mountains near Bharatpur, Nepal, by the famous explorer Stapleton McTavish, it is thought to be one of the missing pages from the dreaded Necronomicon.

“Deep Ones serve Father Dagon and Mother Hydra, as well as The Great Cthulhu.

Land-dwellers who have sought contact with Deep Ones are expected to give female human sacrifices. Deep Ones then mate with the sacrifice and produce hybrid offspring. Human females are seen as little more than breeding stock and once the hybrid is born they are ritually sacrificed.

Deep One hybrid off spring are born with the appearance of a normal human baby, but will eventually transform into a Deep One. The transformation usually occurs when the individual reaches their early twenties. As they mature, they begin to acquire the so-called “Innsmouth Look” The eyes bulge and become unblinking, the gradually lose all body hair, the ears shrink, the skin becomes scaly, and gills form on either side of the neck. Eventually the hybrid will be compelled to join its brethren in one of their undersea cities.”

Discovered in the ruins of a sunken city deep within the Peruvian Jungle 200 miles east of Iquitos, by the famous explorer Stapleton McTavish, it is thought to be one of the missing pages from the dreaded Necronomicon.

Necronomicon Page 143 The Other Gods

“These are the nameless larvae of the Other Gods, and like them are blind and without mind, and possessed of singular hungers and thirsts.

Discovered in Budapest, Hungary, by the famous explorer Stapleton McTavish, it was part of a huge occult book collection of the now deceased Philanthropist Janos Zoltan Wagner, it is thought to be one of the missing pages from the dreaded Necronomicon.

In the recently discovered vaults under the ancestral home of Stapleton McTavish, one of the most prolific explorers and collectors of the occult of his time, strange and disturbing artifacts have been uncovered.

They will be shared with the world, and although overshadowed with certain unexplained events that shroud his later life in mystery, they may just shed some light on McTavish’s disappearance.
But due to a number of freak accidents and unexplained deaths befalling the exploration team these secrets may take longer to uncover than anticipated.
McTavish wrote down everything in his journals, including his research, expeditions and the artifacts he brought back. He would then shut himself in his study and chronicle everything using his trusty Remington Typewriter, ready for publishing. But due the the “fantastical” nature of some of them, his papers were never taken seriously.