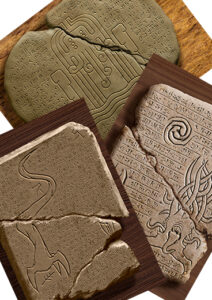 The ancient cuneiform text appears on a number of curious tablets discovered all over the world, each one depicting disturbing carvings.

Discovered in 1923 by Stapleton McTavish the famous explorer and collector of ancient occult artifacts, after being recovered from a wreck off the coast of the ancient city of Gela, Sicily. Thought to be a war ship of the mysterious Sea Peoples, McTavish was at a loss as to how to came to be there.

“There are references to a Haunter of the Dark awaked by gazing into the Shining Trapezohedron, and insane conjectures about the black gulfs from which it was called. The being is spoken of as holding all knowledge, and demanding monstrous sacrifices.”

Discovered on the body of a dead thief in 1923 by Stapleton McTavish the famous explorer and collector of ancient occult artifacts. He was shot by McTavish while looting an archaeological dig 250 miles west of Basrah, Iraq. The focus of the dig was a recently discovered burial mound which was in fact the entrance to a vast underground tomb, of King Gilgamesh, the 5000 ruler of the ancient city of URUK almost 5000 year ago.

It was also noted that the thief wore a headband with a curious and unsettling symbol on, and a strip of blood soaked material hanging from it.

“That is not dead which can eternal lie, And with strange aeons even death may die.”

Discovered in 1923 by Stapleton McTavish the famous explorer and collector of ancient occult artifacts. After becoming lost in a freak sandstorm in the Empty Quarter, almost dead from the heat, he stumbled into the ruins of a great city almost completely taken by the sands. Taking shelter from the storm he found a passage leading deep under the city which lead to a chamber full of tablets similar to the one he managed to bring back. All subsiqent attempts to find the ruin have failed, but McTavish believes it to be the dreaded Nameless City, and the tablets were the inspiration for the Mad Arab Abdul Alhazred’s abhorrent Necronomicon.

To use as a handout in Roll20/VTT – Upload the PNG version to Roll20 Handouts.

To use as a handout in Call of Cthulhu/Horror RPG – Print PDF. Hand to unsuspecting investigator. Laugh maniacally as their sanity drops to zero

Fancy making your own, the check out my Ancient Cuneiform Font

For more information about the life and discoveries of Stapleton McTavish, visit www.thevaultsofmctavish.com

Please note that this is for personal use only. If you wish to discuss a commercial license, please Click Here to contact me